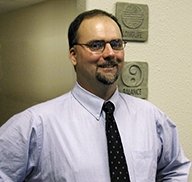 Several years ago, something happened that changed my life forever. I was in construction and used my body to do all sorts of things that put a great deal of strain on my spine. I seemed to get through most of the work OK, but one day I really messed up. I was lifting a heavy box out of a van when my low back became very sore. It was so bad that I couldn’t finish the work day, I had to go home. The next morning when I woke up, I could not even stand up straight, and when I tried I got shooting pains down my leg.

Boy, was I scared. I was missing work and was stuck at home laying on the floor. After a couple of days, I started to feel better and finally after a couple of weeks I was able to return to work. Then bam, it happened again, only this time it was much worse. I was really bent over to the side this time. And instead of pain in my leg, I had numbness all the way down to my foot.

I went to see a medical doctor and he suggested that I quit my job, quit playing basketball and stop water skiing. And, if that didn’t help, then I might need surgery. He said that’s all he could recommend, “that’s all we can do.” Talk about scared – I was terrified.

My wife was going to a chiropractor because she was rear-ended in a car crash. She told me to go there and see if this doctor could help. He explained why I was having numbness in my leg. As it turned out, there was a nerve in my low back that had become irritated from so much pressure. When he began to adjust my spine to get the pressure off the nerve, the numbness went away. I was so relieved. This wasn’t my first time at the chiropractor, but it had been a long time since I had been.

Then an amazing thing happened. After about six months, I realized that I had not had a single day of problems. I was feeling better overall than I had felt in a long time. I continued to see the chiropractor to maintain the improvements in my spine. I was playing basketball two times a week, water skiing as much as I could and working as much as 50 hours a week. I was so convinced that chiropractic adjustments helped me stay active and at work, I suggested to all my friends and co-workers that they try it too. Then one day, when my chiropractor was thanking me for referring a friend of mine to see him, he grinned and told me that I should think about becoming a chiropractor.

I’ve spent the past 15 years taking care of people in the same thoughtful way that I was cared for. I’m here to help you.